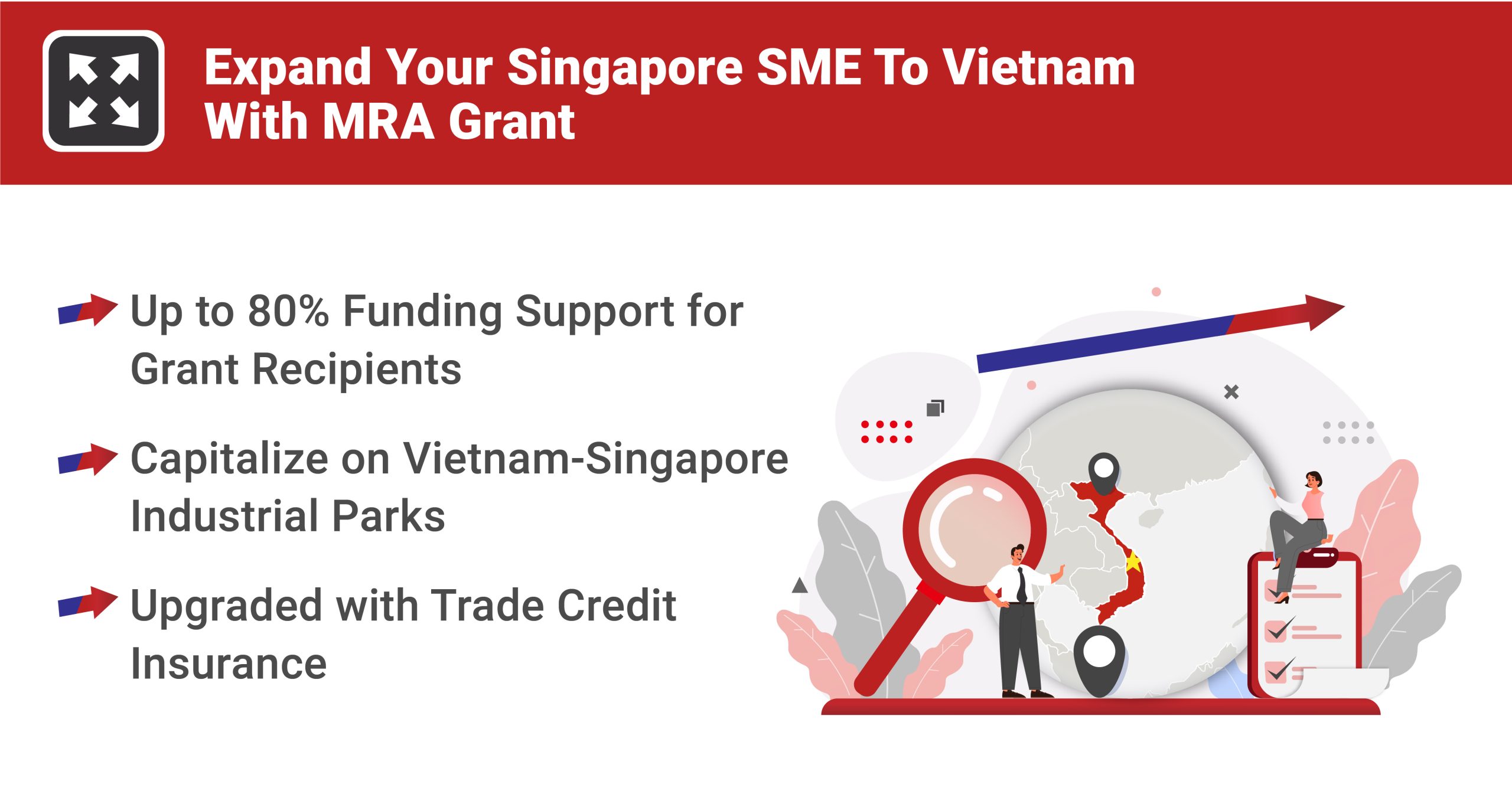 What is the MRA Grant in Singapore?

MRA (Market Readiness Assistance) is a government grant that helps Singapore SMEs (Small and Medium Enterprises) grow into new international markets. Its mission is to help SMEs take advantage of global business opportunities and gain access to the global market.

How much is at stake?

According to Cekindo Vietnam, a market entry firm assisting MRA grant recipients in Vietnam, the maximum support level of up to 80%, as stated in Budget 2021, will be extended for 6 months until 31st March 2022, followed by a support level of up to 70% will be continued until 31st March 2023. With effect from 1st April 2021, the MRA Grant in Singapore will be upgraded to include Trade Credit Insurance (TCI) as a supportable area under the overseas market set-up pillar, encouraging businesses to protect themselves against buyer defaults in new foreign markets.

Who is Eligible for the MRA Grant?

A business entity registered/incorporated in Singapore within limits of 30% local shareholding, an annual sales turnover of maximum S$ 100 million, and an employment size of not more than 200 workers is eligible to apply for an MRA grant, as long as its overseas sales in each of the previous three years did not exceed S$ 100,000.

Companies that have previously benefited from MRA Grant but have not surpassed S$ 100,000 in international sales for its market can continue to be supported throughout the enhancement period.

Companies can apply to several new markets at the same time as long as the new market requirements are satisfied. Since the MRA grant promotes internationalization, business activities conducted within Singapore will not be supported.

Why is Vietnam an Ideal Choice for Singaporean SMEs to Expand into?

Vietnam is an ideal location for MRA Grant Recipients as Vietnam is a success story in terms of growth. Since the introduction of Đổi Mới in 1986, economic reforms have aided the country’s transformation from one of the world’s poorest to a middle-income economy in just one generation, thanks to favorable global trends. GDP per capita rose 2.7 times between 2002 and 2020, reaching over USD 2,800. Poverty rates (USD 1.90/day) fell from over 32% in 2011 to under 2% in 2015.

According to the World Bank health conditions have improved as a result of rising living standards, with life expectancy rising from 70.5 to 76.3 years, the highest in the region among countries with similar economic levels from 1990 to 2016.

In rural places, access to infrastructural services and clean water has vastly increased. In 2016, 99% of the population relied on electricity for lighting, and 70% had access to safe drinking water.

Vietnam’s development goals have become more ambitious, with the government seeking to become a high-income country by 2045. The country also wishes to develop in a more environmentally friendly and inclusive manner.

There are also a number of other variables that make Vietnam a viable option. They are as follows:

Trade and investment between Singapore and Vietnam have increased significantly since the establishment of bilateral diplomatic relations in 1973, and have been a crucial element in the development of strong bilateral relationships.

Since the adoption of the Connectivity Framework Agreement in 2006, numerous initiatives have been taken to create a favorable climate for Singapore enterprises investing in Vietnam.

The seven Vietnam-Singapore Industrial Parks have attracted over USD 9 billion in investments over the years, with 600 companies employing over 170,000 people. These Industrial Parks, located in Binh Duong, Hai Phong, Bac Ninh, Quang Ngai, Hai Duong, and Nghe An, attest to the bilateral economic progression.

Vietnam is one of Singapore’s most important investment locations. There were 1,786 investment projects with a total investment of USD 37.9 billion through 2016. Singapore was the third-largest source of FDI in Vietnam in 2016, accounting for 9.9% of total FDI inflows of USD 2.41 billion. In 2016, bilateral trade between the two neighbors totaled USD 19.8 billion. Vietnam is Singapore’s sixth-largest trading partner, and Singapore is Vietnam’s 12th-largest commercial partner.

Furthermore, Vietnam and Singapore have agreed to pursue the formation of a joint technical working group on a digital partnership as the first step toward a bilateral digital economy agreement.

Vietnam is an appealing destination for Singaporean foreign direct investments because of its strategic position, low-cost labor, growing consumer class, and incentives for international companies (FDIs).

The Communist Party of Vietnam has formally launched its plans to help the lower-middle-income country achieve its aim of being a developed nation by 2045.

Vietnam belongs to a group of nations with a per capita gross national income of USD 1,036 to USD 4,045. According to the World Bank, the country’s GNI (Gross National Income) per capita was USD 2,590 in 2019.

By 2030, when the Communist Party of Vietnam celebrates its 100th anniversary, Vietnam hopes to be a thriving, upper-middle-income country with modern industries & infrastructure.

The MRA Grant is effectively poised to help Singaporean SMEs expand in the mushrooming Vietnamese economy with a bounty of untapped opportunities. To top all the aforementioned perks, Singaporean SMEs must take into consideration the low cost of setting up a business and the fact that there are no minimum capital requirements in most economic sectors.

Talk to our experts

Expand into Vietnam easily with the MRA Grant

Our content team includes in-house and freelance writers across the globe who contribute informative and trending articles to guide aspiring entrepreneurs in taking their business to the next level in Asia.